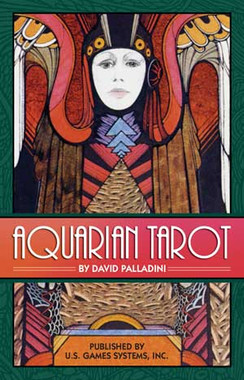 First introduced in 1970, the compelling art deco imagery in this now-classic tarot deck brought medieval tarot symbolism into the modern Aquarian age. Aquarian Tarot has remained a bestseller throughout the four decades it has been in print and still resonates today with those seeking transformation.

“Man has always been interested in the mysteries of his unconscious and the future; whether consciously or not, he has always strived toward the light of transcendent life. The cards, in the universal language of symbols, explore man’s collective unconscious and its bearing on one’s personal life and growth. Whether the cards help one know oneself better or point one in a new direction, they add a new dimension to one’s experience of life.”
—from the Aquarian Tarot booklet by David Palladini
Also by David Palladini: The New Palladini Tarot