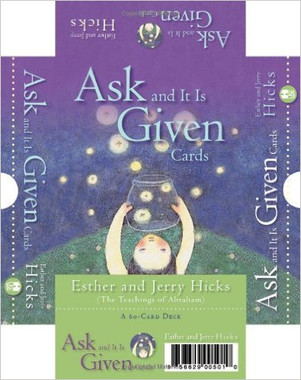 Publisher Hay House
Publication Date 9/1/06
ISBN 978-1-4019-1051-8
These beautiful cards capture the essence of the life-changing, best-selling book Ask and It Is Given. You will experience an enhancing of your personal power, which may, at first, seem illogical or even magical, as the Energy Stream from which these cards have come dovetails with the true essence of your own being.

As you return for frequent visits to these beautiful cards, you will begin to notice a definite closing of the gap between where you are and where you want to be on all subjects that are important to you.

Featuring the concept of the Universal Law of Attraction, the Hicks' have published more than 800 Abraham-Hicks books, cassettes, CDs, and DVDs that have been translated into more than 30 different languages. They may be contacted through their extensive interactive Website at: www.Abraham-Hicks.com ; or by mail at Abraham-Hicks Publications, P.O. Box 690070, San Antonio, TX 78269.