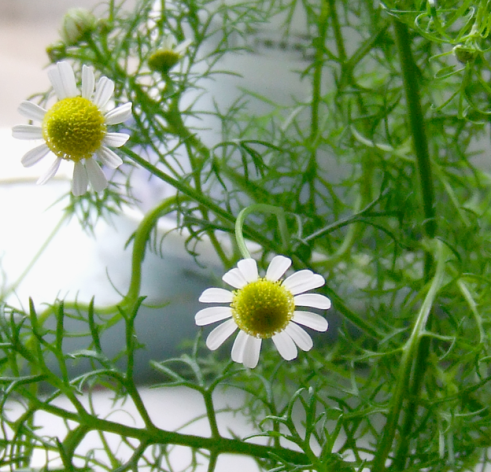 Chamomile could be Roman (Anthemis nobilis), German (Matricaria chamomilla), or English (Chamaemelum nobile) (1). It has flowers like that of the picture, daisy-like white with yellow centers. Some people who are near plantations or chamomile fields benefit from lying or stepping on these flowers and thereby inhaling its scent. Chamomile is popular for its calming properties, similar to that of lavender. Roman chamomile oil is pale yellow in color with a tinge of blue sometimes, while German chamomile oil has more intense blue in it.

The traditional uses of Roman chamomile oil are as antidepressant, relaxant, reducer of preoperative anxiety, and as mood-swing reliever during PMS (Premenstrual syndrome) (1). For nervous tension and anxiety put 2 drops on a tissue and tuck it in a bra strap or a pocket nearest the nose. Alternatively, you could use a fragrancer or an oil burner. Just put 3 drops of it in one of the two mentioned, and keep that open for two hours before sleeping or during stress. Do not have it burning for more than two hours because you might associate the scent with other than being a calming, stress-reliever odour. For the PMS, add 3 drops of the oil into a tablespoon of carrier oil. Then massage your abdomen and lower back for instant relief. You could also have a warm bath with 3 drops of chamomile oil.

An important reminder about chamomile oils, Moroccan chamomile oil (Ormensis mixta or O. Multicola) is not used in aromatherapy. So be careful when buying this kind of oil.

We are selling chamomile and other essential oils at 2W 14th St. New York, NY. Please do visit us there. See you!