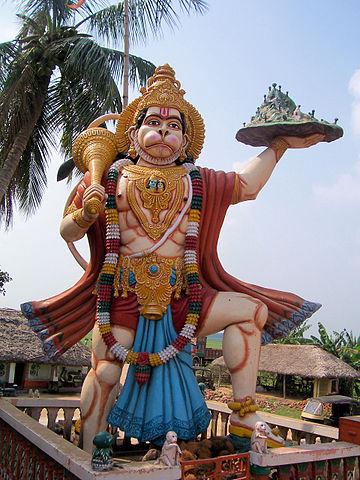 The story of Hanuman can be read in the epic Ramayana (1). Hanuman Chalisa, the forty-versed mantra/prayer was written by 16th century poet, Tulsi Das. Tulsi made a lot of prayers to Lord Ram and Hanuman. You can recite that prayer by reading the Hanuman Chalisa article here on Namaste Bookshop website.

It all started when darkness covered the earth, headed by Ravana who conquered even the incarnated gods. And because of that, God had to incarnate on earth in order to restore Dharma. It was in the form of Ram that God came to earth through his father King Ayodha. Other gods in heaven/nirvana also wanted to help God so they decided to incarnate as well, including Lord Shiva. Lord Shiva created Hanuman by giving his essence to Pawan (Wind-God) and Anjani (Vanara - race of man-monkeys). When they got older, Rama married Sita (incarnation of goddess Lakshmi) who was daughter of King Janaka. King Ayodha had a debt and in return he was asked to banish Ram for 14 years. So Ram, Sita, and his brother Lakshman went to the forest to live there. When Sita was left alone in their house in the forest, she was kidnapped by Ravana and taken to his island. The two men came looking for her when they came back to the house. Hanuman, on one hand, became adviser and friend of Sugriva, King of the Vanaras. In behalf of the Vanaras and his King Sugriva, Hanuman approached Rama and Lakshman in order to be of service to them. Rama gave his ring to Hanuman for him to give it to his wife Sita when they meet. And so their adventures continue, Vanaras and man-bears all went to search for Mother Sita. When they came to the coastal areas they stopped their trying to figure out how to cross the ocean because there was one place they haven’t searched - the island of Lanka. Jamabavan, King of the bears approached Hanuman and said to him, “You who is son of Pawan, who is strong and very intelligent. Is it something that you cannot accomplish.”And so moved and inspired by Jambavan’s statement, Hanuman jumped the 800-mile distance to Lanka island. When he found Sita, he gave her Rama’s ring along with a message of hope and care for her. Afterwards, Hanuman came back to Rama to report the whereabouts of his beloved. Rama together with the army of humans, Vanaras and bears built a stone bridge towards the island of Lanka where they waged war against Ravana and his men. In the end, Rama and his men won and they successfully went back to the palace of his father where he and Sita was crowned king and queen.