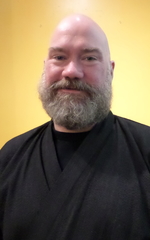 Rev. Jyogan is a Reiki Shihan (Master Teacher) and Buddhist Minister. He is one of very few Reiki Teachers in the west who have trained in all 3 initial levels of Reiki directly in Japan as he lived in Japan for nearly 3 years. If you’re looking for a direct connection to Traditional Japanese Reiki you have found it. He brings his over 25 years of study and practice of Japanese Buddhism into his Reiki training.

His foundation is in Japanese Buddhism which he was drawn to while studying Psychology at De Paul University in Chicago.
He began his study of Japanese Buddhism in 1989 under the guidance of Rev. Gyomay Kubose (d) in Chicago. In 1992, he moved to New York City to attend Graduate School in Clinical Psychology at the New School Graduate Faculty. After, he began a career as a Coordinating Producer for a Japanese Television Company based in NYC and produced thousands of news segments that were broadcast nationally on Nippon Television in Japan. He first visited Japan in 1995, again in 2002, and lived in Japan from 2007-2010.

He took Buddhist refuge vows in 2006. Jyogan, his given Buddhist name, means “Pure Vow” which is the vow that the Buddha took to help all people become enlightened. It is this vow that serves as his inspiration and motivation.

While living in Japan’s sacred city of Kyoto studying Buddhism, he trained in Traditional Japanese Reiki with Buddhist Priest, Rev. Hyakuten Inamoto. He studied each level directly and individually with Inamoto Sensei. Reiki is a hands-on-healing treatment that was created by Mikao Usui in Kyoto. Jyogan’s Reiki lineage is 4-degrees from Mikao Usui. He has visited, meditated at, and energetically connected with the sacred sites of Reiki including Mt. Kurama and Mikao Usui’s Memorial.