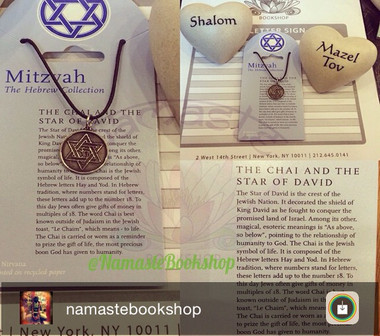 Mitzvah The Chai and The Star of David

Mitzvah The Chai and The Star of David

Mitzvah The Chai and The Star of David Pendant Necklace

The Star of David is the crest of the Jewish Nation. It decorated the shield of King David as he fought to conquer the promised land of Israel. Amongst its other, magical, esoteric meanings is "As above, so below", pointing to the relationship of humanity to God. The Chai is the Jewish symbol of life. It is composed of the Hebrew letters Hay and Yod. In Hebrew tradition, where numbers stand for letters, these letters add up to the number 18. To this day Jews often give gifts of money in multiples of 18. The word Chai is best known outside of Judaism in the Jewish toast, "Le Chaim". which means to life. The Chai is carried or worn as a reminder to prize the gift of life, the most precious boon God has given to humanity .

Please note only the Pendant Necklace the Retail Packaging which is displayed is listed for sale.

The Stones with the Words in the picture are NOT included in the sale of this listing.