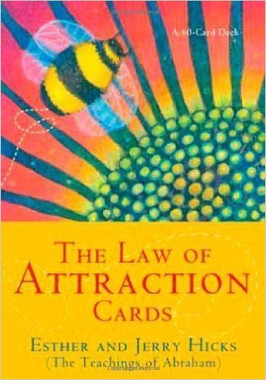 Publisher Hay House
Publication Date 1/1/08
ISBN 978-1-4019-1872-9
Based on the New York Times bestseller 'The Law of Attraction' these profound ideas have been created into a powerful oracle system.
This card deck by New York Times bestselling authors Esther & Jerry Hicks presents the teachings of the Non-Physical entity Abraham in the form of these beautifully illustrated cards.

By using these cards you'll learn how all things, wanted and unwanted, are brought to you by this most powerful force. Learn how to make these laws work to your advantage and use this card deck to help you to be, do or have anything you desire.

Featuring the concept of the Universal Law of Attraction, the Hicks' have published more than 800 Abraham-Hicks books, cassettes, CDs, and DVDs that have been translated into more than 30 different languages. They may be contacted through their extensive interactive Website at: www.Abraham-Hicks.com ; or by mail at Abraham-Hicks Publications, P.O. Box 690070, San Antonio, TX 78269. 978-1-4019-1872-9