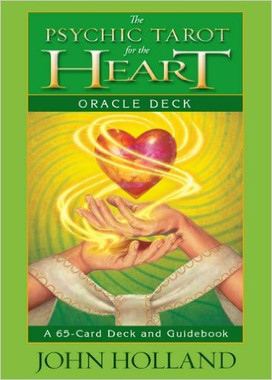 The Psychic Tarot for the Heart Oracle Card Deck: A 65-Card Deck and Guidebook

Publisher Lifestyles
Publication Date 2/6/14
ISBN 978-1-4019-4025-6
The Psychic Tarot for the Heart Oracle Deck, with its accompanying guidebook and 65 beautifully illustrated cards, was created to assist and guide you in matters of the heart, especially the different relationships in your life. Relationships of all kinds are really about you! They will often reflect back what you need to see and the lessons you need to learn.
By using this deck and the techniques that psychic medium John Holland imparts, along with the wisdom of the tarot, you'll begin to understand and look at relationships - past, present and future - with an intuitive eye. This deck is not just for lovers! These cards will resonate with anyone and add clarity around all types of relationships, including the most important one of all... the relationship with your self.

John Holland – Internationally renowned psychic medium, spiritual teacher, author, and radio host.” His public demonstrations provide audiences with a rare glimpse into the fascinating subject of mediumship, which he delivers in his own unique style, explaining the delicate process of raising his own vibrational energy to link with the Other-Side and deliver messages, which he does with clarity, passion and the utmost integrity.

John has spent a significant part of his life developing his abilities, and spent two intensive years studying in the UK, where he got the thorough grounding and training to become one of the most sought after professional mediums on the world stage today!

He has starred in several TV specials, including A&E’s “Mediums: We See Dead People,” which provided a fascinating insight into how John works as a Psychic Time Machine, where he’s able to pick up vibrations and detailed information, whether it’s seen, felt, or heard from a past event. He also starred in his own pilot “Psychic History” for the History Channel.

John can be heard every week, as he hosts his own Internet radio show, which has been running for 9 years on Hay House Radio®, called “Spirit Connections.”