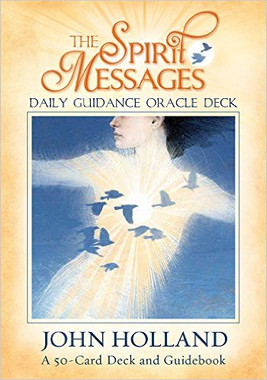 Publisher Lifestyles
Publication Date 8/26/14
ISBN 978-1-4019-4026-3
The Spirit Messages Daily Guidance Oracle Deck, with its accompanying guidebook and 50 beautifully designed cards, was created by John Holland to assist you in getting support, comfort and divine guidance from Spirit, your loved ones, family, ancestors, friends, guides and helpers in the Spirit World. These cards will also help the user to develop a higher awareness of Spirit and remind you that you are never truly alone.

These extraordinary cards will bring insight and clarity around some of the major decision points in your life, or just to reaffirm that you're making the right decisions. The Spirit World communicates through these cards with guidance and direction in matters of self-love, vulnerability, relationships, trust and more. As you work with these cards, they will strengthen your natural ability of intuition and the beautiful, loving bond that you and the Spirit World share.

John Holland – Internationally renowned psychic medium, spiritual teacher, author, and radio host.” His public demonstrations provide audiences with a rare glimpse into the fascinating subject of mediumship, which he delivers in his own unique style, explaining the delicate process of raising his own vibrational energy to link with the Other-Side and deliver messages, which he does with clarity, passion and the utmost integrity.

John has spent a significant part of his life developing his abilities, and spent two intensive years studying in the UK, where he got the thorough grounding and training to become one of the most sought after professional mediums on the world stage today!

He has starred in several TV specials, including A&E’s “Mediums: We See Dead People,” which provided a fascinating insight into how John works as a Psychic Time Machine, where he’s able to pick up vibrations and detailed information, whether it’s seen, felt, or heard from a past event. He also starred in his own pilot “Psychic History” for the History Channel.

John can be heard every week, as he hosts his own Internet radio show, which has been running for 9 years on Hay House Radio®, called “Spirit Connections.”