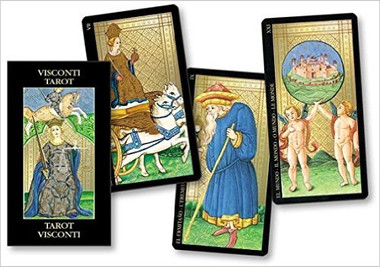 One of the oldest Tarot decks preserved to this day and perhaps the most beautiful of all . . . these cards are universally recognized as one of the most extraordinary examples of miniature art and Renaissance symbolism. The Visconti Mini Tarot, which has been restored  and printed with gold to enhance its original splendor, is now available in a new miniature size.

When I was in high school, I was fortunate enough to take a trip through Europe. I desperately wanted to see some of the famous sites. I ended up disappointed with many of them. The Leaning Tower of Pisa was just an old building falling on its side. The Eiffel Tower was an enormous rusty hunk of metal. The Mona Lisa was dark, dingy, and criss-crossed with hairline cracks. The ceiling of the Sistine Chapel was likewise dark and dismal with muted colors (it’s been cleaned since I was there). The truth is that great works of art and architecture age and need to be cared for. Most art does not receive the appropriate care.

Perhaps the oldest—and certainly the most complete—example we have of the Tarot is known by a variety of names. Attributed to Bonifacio Bembo, they were commissioned in 1450 for Filippo Maria Visconti, the Duke of Milan, Italy. Because they weren’t finished until his successor, Francesco Sforza, was in office, this deck is often called the Visconti-Sforza Tarot or simply the Visconti Tarot. Today[read more]